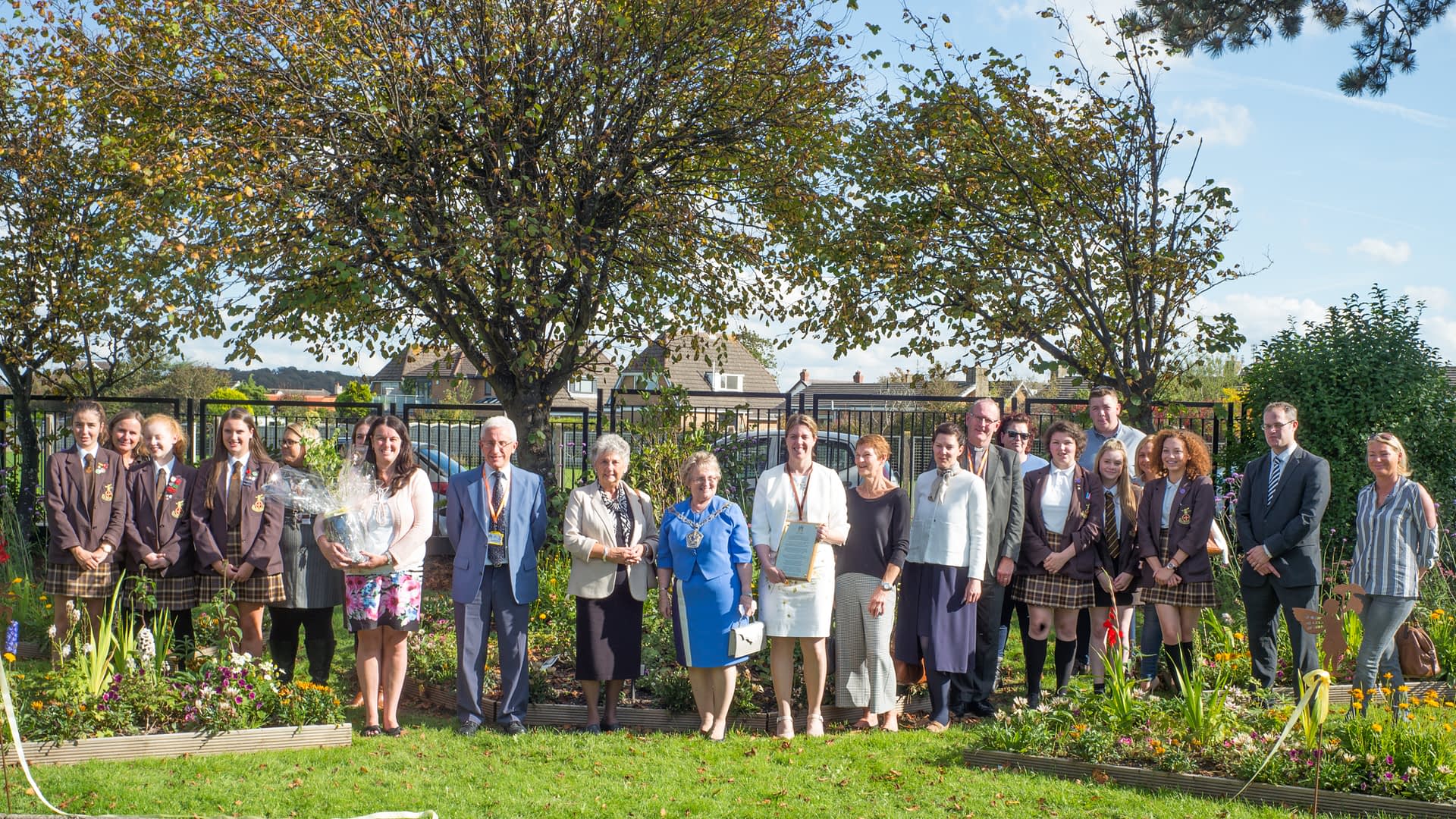 The design was brought together from ideas in the group and a sunflower design was chosen. Three genetically identical roses have been named after James Baines and planted around a central tree to represent the three schools bearing his name.  Radiating from the centre are four flower beds, one for each of the four houses making up Baines High School. Four fruit trees have also been planted and will show the bearing fruit in the future, in the same way the students in each of the houses bear fruit in our community.

With the plans now made Mr Hallsworth, Amber Hughes, Amy Gornall, Summer Holdip along with other friends along the way had to live up to the school motto; ‘Nothing without effort’. They planted seedlings to grow over winter and in spring dug in the rain and the sunshine to prepare the ground. The first round of plants were eaten by three wild rabbits who broke into Mr Hallsworth’s garden, causing several scene fitting of a Beatrix Potter book. The girls had to learn how to use drills and saws for the first time and construction of the raised beds was completed in time for the 6 tonnes of soil to arrive. The plea for help was answered by Mr Ashworth and Mr Whittaker who came to the rescue filling the beds with the 6 tonnes of topsoil in no time!

The following day the 360 bedding plants were planted and we were ready for the arrival of the roses. After the sad new that our Chair of Governors David Jesson had passed away a fourth rose was added to the centre. The David Jesson rose was named and planted alongside the James Baines rose to mark Mr Jesson’s long standing contribution to our school.

We watched with anticipation over summer as the garden bloomed and our first two tiny pears appeared giving a glimpse of the fruit they will bear in the future, just as we look on as the pupils of each of the three schools grow and flourish within our community and beyond.

September saw the garden in bloom and just before Autumn took hold a celebration was held to officially open the garden. With speeches about the history of the school and the bright future we share from Our New Headteacher Mrs Chapman and our previous Headmistress Mrs Ryding, a presentation about the garden and a recital of the Poetry Clubs 1717 poem linked to the garden, the garden was officially opened by the Mayoress of Fylde Mrs Geraldine Singleton.

Along with the lasting memory of the garden a brass plaque with the 1717 poem can now be seen in the entrance hall to the school as a tribute to the hard work and vision of the pupils involved.