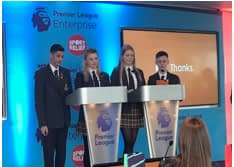 On Sunday the 17th March, our year 9 Enterprise Team; Abbi, Brandon, Bobby and Katherine, travelled to London to compete in the Premier League Enterprise Challenge.

The event, to be held the following day, was the culmination of 5 months’ hard work. The team developed and presented their Business Plan and promotional campaign, to encourage more people in the 18-24 age bracket to attend football matches, at both club and regional finals. which was Supported by Jack Shields and Simon Smith from Blackpool Community Trust.

We are incredibly proud of our team who emerged as one of six finalists who engaged with the Enterprise Program, from over 500 schools, 170 teams, and over 1100 students who entered the competition.

They were nervous but well prepared to present to the judges who would decide the winner.  The judges on the day were; Theo Paphitis (from Dragon’s Den); a Sport Relief Ambassador, Peta Bistany, Premier League Executive Office Director and Alex Scott, TV broadcaster.

Arriving in London early evening, the stop was to check out the Ernst and Young offices where the competition would be taking place.

Lunch, final rehearsals and time for a quick picture and pep talk from Paul Rachubka, Blackpool FC Goal Keeper 2007 – 2011, before the presentations began.

We were the final school to present and this meant a nerve wracking afternoon for us. However, we rose to the challenge and made a flawless presentation to a packed room.

Speaking of all the teams even Theo Phapitis admitted that he would have been too nervous to stand and present in the professional way the teams did.

He said, “These kids are presenting to us and were asked some difficult, cutting questions but they came back to me straight away.  That confidence will hold them in good stead for the rest of their life.”

Unfortunately, there had to be only one winner, and we were very disappointed not to have beaten Stoke but Theo Paphitis had words of encouragement for the other five teams who had worked so hard to get to the final.

“Stoke won but they were one of six brilliant presentations,” he said. “Every year we say, ‘How can it get any better?’ ‘How can we be more impressed with the level of entrants and yet again?’  Another year on and we find six amazing teams who all could have won.”

These four students’ roles model our Baines motto, Nile Sine Labore and I am so proud of them. A magnificent achievement.